Being the birthplace of the United States, naturally the Greater Philadelphia area has some incredible historic venues; we’re honored that Phoenixville Foundry is among them. While our facility has gone through a metamorphosis over the years, one thing remains the same—it’s a Phoenixville icon and a staple in our community responsible for our namesake!

Built in the late 1800s, the foundry produced castings ancillary to the Phoenix Iron and Steel Company’s main business as a manufacturer and fabricator of steel structures. The town name Phoenixville was inspired by the former owner of Phoenix Iron and Steel Company during the early years of the business. He noted that the transformation of the iron manufactured, how it went from something solid to something that can be rolled and flattened with simple red-hot heat, reminded him of the phoenix and the transformation it makes throughout its lifecycle.

It’s a fitting sentiment, as since its inception, the foundry has thrived in all stages of its lifecycle. Let’s take a trip down memory lane, shall we?

Iron work began on the banks of the French Creek in 1783 and continued, weathering massive changes in ferrous metalworking techniques, for 200 years. The story of the foundry truly begins with the formation of Phoenix Iron Company in 1790; the company was founded to produce nails just after the Revolutionary War.

Fast forward to 1813; budding entrepreneur and bridge-builder Lewis Wernwag (the one responsible for the namesake of our town) decided to purchase the Phoenix Iron Company’s nail mill, and that’s when things really started to take off. Over the years, the business went through a variety of growth stages, transforming from a company producing tons of nails a year to tons of iron. The iron was used for everything from fabricating railroad rails to Griffin Guns for the United States Army during the Civil War.

Then came the Phoenix Column. This proprietary structure was designed by the new owner, Samuel Reeves. The Phoenix Column is a circular, hollow structure made up of multiple steel sections flanged and riveted together. This changed construction forever, as well as the landscape of their business, which warranted the construction of a new building.

In 1882, the Phoenixville Foundry building you know today was constructed as business continued to grow, and the company pivoted again to the Phoenix Iron and Steel Company, pouring iron castings well into the 1970s, in addition to steel production.

The Phoenix Iron and Steel Company was a self-contained operation. Many of the old wooden molds that were used to create the machinery for other parts of the mill show the intricacy and detailed craftsmanship that went into the making of the machinery. There is a huge wooden crane inside the venue, still in its original location, thought to be the last and largest of its kind left in the entire United States. 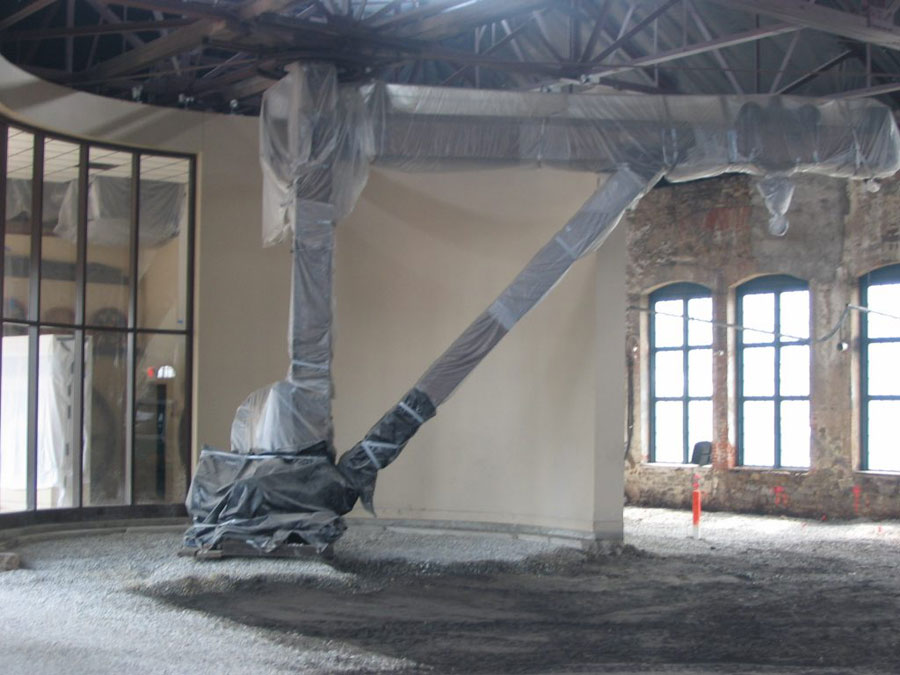 The ingeniousness of its design tells its own story about the standard of quality and inventiveness that made the Phoenix Iron Works respected and renowned throughout the world.

Built of locally quarried sandstone, the building’s walls are two feet thick. The dark red and purple veins in the deep russet stone give the building a dramatic and haunting quality. One is reminded of medieval castle walls, still standing and undefeated by time. Indeed, its large Romanesque window and door apertures underscore the impression of a building that has withstood the ages.

Ironically, its massive—almost 14,000 square feet—size is relieved by the large openings. A unique band of clerestory windows divides the double tiered roof structure. These windows serve several purposes. They allow light from above, much the same way that skylights do today. They also provided the means by which intense heat produced by the furnaces could escape the building.

The 1900s | The Transformation

The Phoenix Steel Company eventually closed its doors in 1987, and most of the buildings that had been built as a part of the complex were torn down, but not the foundry building. The building stood abandoned for a decade and eventually made it onto the list of Pennsylvania’s Most Endangered Buildings. It was then that the governor at the time instructed it would be turned into a museum to preserve the history of the region.

As a result, in 1998, the Phoenixville Area Economic Development Corporation (PAEDCO) purchased the building. From there, PAEDCO worked with the National Park Service to renovate the exterior of the building, and they built the Schuylkill River Heritage Center with over $5 million in renovations and nearly ten years of construction and restoration. The museum is still in operation and a great attraction for guests, providing all the history of the company, the building and the region over 1,600 square feet of space.

On December 29, 2006, The Hankin Group of Exton, PA acquired the Phoenix Foundry property from the Phoenixville Area Economic Development Corporation (PAEDCO). The sale was facilitated by the participation of the Chester County Industrial Development Authority.

The Hankin Group handled the interior renovations with plans for an “Entertainment and Special Event” venue. Completed in 2008, the Foundry now serves as a flexible facility that can accommodate a variety of events from formal weddings to corporate conferences to live performances and exhibit space.

The industrial character of the turn-of-the-century steel foundry is largely intact and has been improved to provide a sense of sophistication and elegance that is necessary to attract weddings and other formal affairs.

Some of the original features of the building that are still intact and restored include:

Phoenixville Foundry has now been proclaimed one of Chester County’s most unique, premier event venues for over 12 years. We are honored that these historic walls have been host to some extraordinary events and are delighted that what began in 1882 was able to take on a new life that we’ve been able to share with so many visitors over the years. We look forward to many more years of history and memorable celebrations!

Kaitlyn & Mike
A Summer Wedding at the Phoenixville Foundry Was Featured on J. Scott Catering’s Blog

Ready to get started?

Request a personal tour, check availability, and make reservations to create your own unforgettable event today.

Get a quote for your event by contacting us below: